Meat is one of the most popular protein sources in the human diet. Its popularity can be seen worldwide, and is showing no signs of slowing down. Global meat production has increased so rapidly that it has more than quadrupled since 1961. This is no laughing matter. 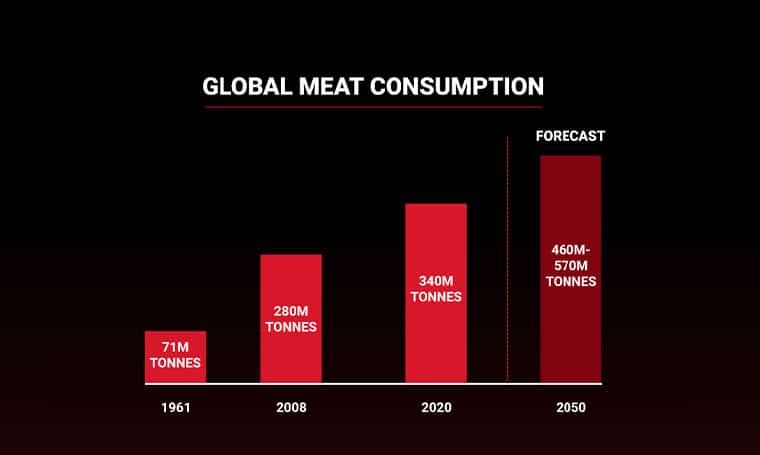 What is the problem? Well, meat consumption is one of the leading causes of climate change and is totally unsustainable at the current and projected future rates. If we don’t act now to reduce our meat consumption globally, we will likely face a food shortage crisis in less than thirty years time. There will not be enough food on the planet to feed the total population, while land is decreasing due to global warming.

What is the solution? Luckily, there are countless alternative protein options out there. These options contribute far less to deforestation, water use, soil infertility, and therefore climate change. This also makes them far more sustainable. What’s more, with current offerings, you don’t even have to compromise on the recipes, flavors and textures you love.

Globally, we produce more than 340 million tonnes of meat each year. That’s a staggering number. It’s more than triple the amount of meat produced just fifty years ago. The global meat industry was estimated to be worth 838 billion U.S. dollars in 2020. That’s equally as staggering. Scarier still, global meat consumption is projected to hit between 460 million and 570 million tonnes a year by 2050, and the industry value is expected to surpass one trillion U.S. dollars by 2025, as both the popularity of meat and the global population grow. If it hits 570 million tonnes, that would make it twice as high as the global consumption in 2008. That is some rapid growth.

Which Continents Consume the Most Meat? 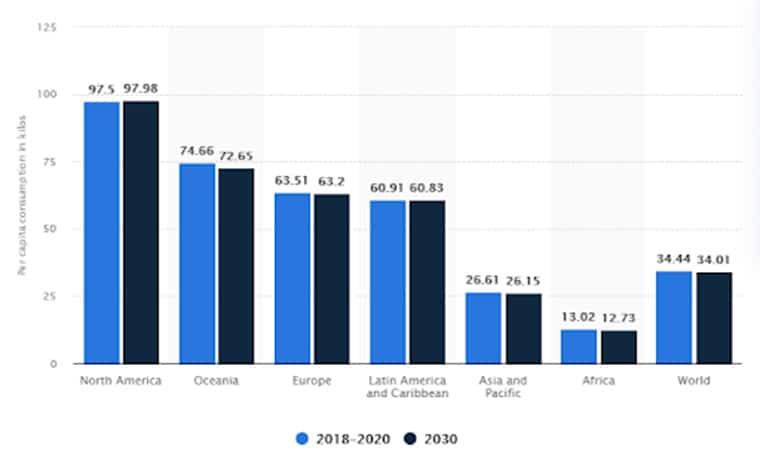 Fun fact: if everyone in the world consumed as much meat as the average North American, the world could only feed 2.5 billion people.

What Meat is the Most Popular?

The answer to this differs across countries and cultures. However, the most popular types of livestock globally are poultry, cattle (beef and veal), pig, and sheep.

In China, approximately two-thirds of meat consumption per capita is pigmeat. Whereas beef is the most popular meat consumed in Argentina, where it comprises over half of the total meat consumption. Mutton and goat meat is far more popular in New Zealand compared to other countries on average.

In 2018, it was estimated that the following number of livestock were killed for meat production:

This should help shed some light on the most popular meat, although it’s not always correlated (you can produce a lot more meat from a cow than a turkey, for example, so less cows are needed to be killed to produce the same amount of meat as turkeys).

Why is the Increasing Meat Consumption Trend a Problem?

As highlighted above, the meat industry has grown rapidly over the past few decades and is set to continue growing. Our consumption of meat is only going up and up. With this growth, its contribution to climate change is becoming an even more urgent problem, as is its impact on sustainability. The planet’s resources are finite, and we are using them up at an alarming rate to cater for the meat industry. When you ask yourself “why is eating meat bad for the environment” the below should be your answer. 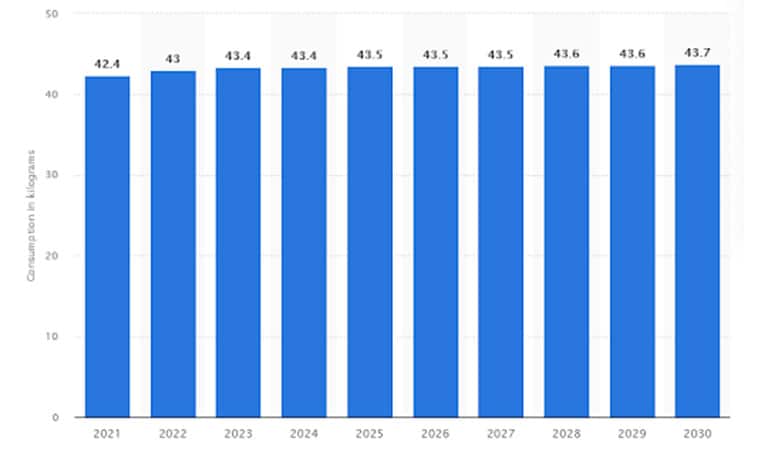 To produce meat, more energy, water and land is needed than for any other food source. For example, it takes 75 times more energy to produce meat than corn. Just one kilo of grain-fed beef, the equivalent of roughly six to eight beef burgers, uses over eight liters of gasoline. What’s more, half of all US water consumption goes towards growing grain to feed cattle. Beef requires 15,000 liters of water per kilo, whereas vegetables require 300 liters per kilo.

Why are these relevant? Well, all of that energy, land and water overuse to feed our meat consumption habits are some of the biggest contributors to climate change, deforestation, and the sustainability issue we are currently facing. The earth can only take so much more before the damage is irreversible.

Reportedly, a 90% reduction in Western beef consumption is necessary to mitigate the damage of the climate change crisis we find ourselves in. Unfortunately, meat consumption trends are not following suit, which is precisely why there is a problem. 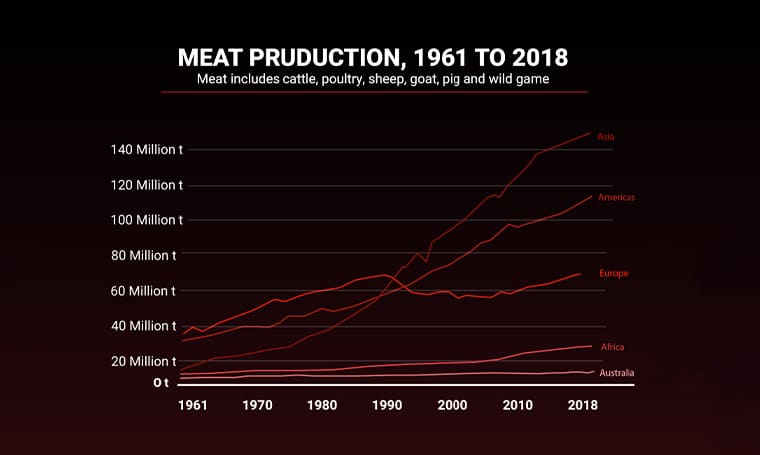 Forgetting the threat a meat heavy diet poses on the environment for a minute, what about the threat to your health? While poultry is generally regarded as a healthy protein, red meat is proven to increase the risk of diseases such as cardiovascular disease and diabetes. Lots of meat is also processed, full of unnatural hormones, additives, fat and more that can compromise your health too. Burgers and sausages are common culprits here. Many vegan statistics indicate the benefit of reduced meat consumption on health.

So, if we really need to cut down on meat, what else is out there? That’s a good question. Luckily, there’s no shortage of more sustainable options. Some of the most high-protein, plant-based foods out there are:

Redefine Meat brings you new types of meat with all of the flavor and texture you’re used to but without the extra baggage. Craving a burger? Why not swap out a bog-standard beef burger with a Redefine Meat Burger? It’s hearty, meaty and made with plant-based ingredients for even the most devoted meat lover to enjoy. This way, you don’t have to compromise on taste, health or sustainability. The winning trifecta of a truly good burger!

REDEFINE MEAT™ has an entire range of New-Meat™ products, including ground meat, sausages and kebabs. Take your pick for guilt-free meat-eating, and enjoy all of your favorite meals while taking steps to help the environment.

Pulses require a lot less water to produce than meat, for starters. Secondly, pulses are rich in protein without the increased risk of certain diseases associated with diets high in red meat, for example. Eating half a cup of pulses a day can increase your fiber, protein, calcium, zinc, iron and magnesium levels, and lower your intake of total and saturated fat. Pulses are also incredibly affordable in comparison to meat. One cup of lentils has approximately eighteen grams of protein. Considering that the daily recommended protein intake is 56 grams per day for males and 46 grams per day for females, this is a significant proportion.

Why is meat consumption bad?

Meat consumption is considered bad for multiple reasons. The meat production industry is one of the biggest contributors to climate change, deforestation, biodiversity loss, water overuse and more. Consequently, it leads to natural disasters, species becoming extinct, global warming, etc. What’s more, some people consider meat consumption to be bad because they are against the exploitation and mistreatment of animals prevalent within the industry. Others believe meat consumption is bad because of the health risks posed by meat such as beef, such as increased chances of cardiovascular disease or diabetes.

Is meat consumption going down?

No, despite the urgent threat to the environment, meat consumption is showing no signs of slowing down. In fact, it’s projected to hit between 460 million and 570 million tonnes a year by 2050. If it hits 570 million, that will make it twice as high as the global consumption in 2008.

Currently, we produce 340 million tonnes of meat each year around the world.

Which country consumes meat the most?

The US has the highest meat consumption rate (124 kilos per person per year), closely followed by Australia at 122, Argentina at 109 and New Zealand at 101.

Which country consumes meat the least?

Bangladesh consumes the least meat per year, at only four kilos per person. Following that is India, at 4.4 kilos. Burundi, Sri Lanka, Rwanda and Sierra Leone all closely follow. 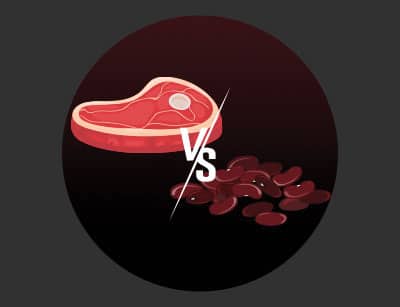 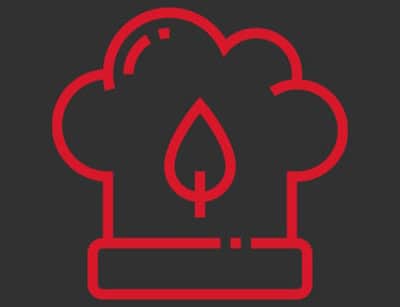