We’ve all heard of Veganuary. And if not, well, where have you been? For some, it’s the perfect month-long initiation into a more sustainable life, while for others it’s simply a temporary food challenge. Regardless, it’s a time where new recipes and new restaurant menu options are required to appeal to the hundreds of thousands of Veganuary participants globally. Are you ready to jump on board?

Veganuary is an annual, global campaign to inspire people to try being vegan for the month of January. Their slogans are “Try Vegan This Month” and “Join the Plant-Based Revolution”. In 2022, over 629,000 people from over 220 countries and territories took part in the official campaign. More than 1,540 new vegan products and menus were launched specifically for Veganuary in 2022.

Some of the main aims of Veganuary go beyond just encouraging people to try vegan, they stretch to encouraging businesses to offer more vegan food provisions in shops and restaurants and to make veganism more visible throughout the global media.

Veganuary is the perfect opportunity for restaurants to redefine their menus with new-meat. Refreshing your menu with seasonal and timely ingredients and dishes is a great way to drive traffic to your restaurant, and in this case will mean being part of a global revolution.

Sometimes, taking on the Veganuary challenge means swapping your regular recipes for some vegan ones. It’s an easy switch to make, and here is some mouthwatering inspiration to make the transition smoother and get your creative juices flowing.

There’s no need to miss out on your favorite meals when participating in Veganuary. Redefine Beef Mince is the star of the show in this stuffed vegetable recipe (well, alongside the mix of vegetables, spices, and herbs). It’s a nutritious, protein-rich, and delicious recipe that makes for the perfect crowd-pleasing dinner. 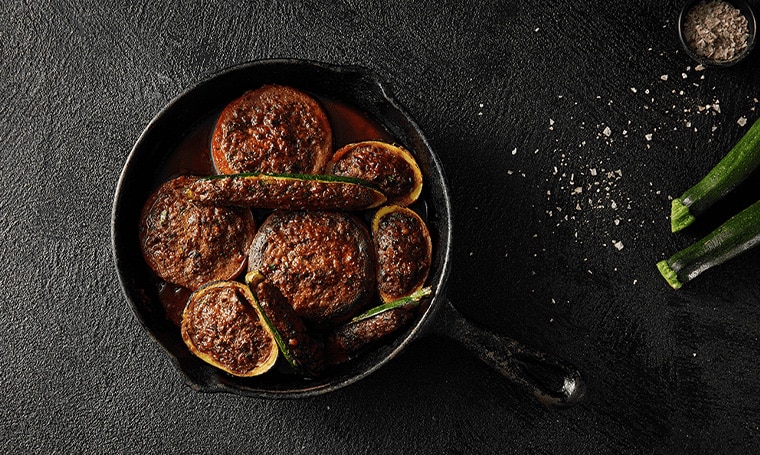 Burritos are perfect for dipping your toe into Veganuary water because they’re super easy to turn plant-based. Simply swap out the traditional chicken or beef for Redefine Beef Mince and black beans, and for the rest you can either stick to your favorites or follow this recipe for inspiration. Before you begin this recipe, make sure to check that the pasta is egg-free. After that, you’re good to go for this Veganuary comfort food classic. Given that Veganuary – vegan January – coincides with the coldest depths of winter, there’s nothing more warming than a hearty bowl of Bolognese. If you’re looking to go down the authentic route, ditch the spaghetti for Tagliatelle like the Bologna locals do. In a similar vein to the pasta above, make sure to check that the noodles you use for your ramen are not egg-noodles. Then, take it away with this winter-warmer flavor explosion. Each mouthful is guaranteed to bring you so much flavor that it makes for the perfect transition from a traditional meat diet to a vegan one. The classic flavor combination of garlic, cumin, tahini, and lamb are brought together in this lamb shawarma dish made with Redefine Lamb Flank. A refreshing chopped salad accompanies the otherwise rich components to create a well-balanced meal that will satisfy your Veganuary palette. Veganuary is a great opportunity for restaurants to shake up their menus with plant-based dishes, especially those that make the transition from a traditional meat-eating lifestyle to a plant-based diet easier – since Veganuary participants are in a trial period. New-meat* is a great option for this purpose given the potential to recreate everyone’s favorite burger, mince meat, sausage or steak dishes without compromising on the meaty taste or texture they love.

A wonderful idea for a Veganuary menu could involve offering a plant-based dish of the month or entire specials board to draw in extra traffic from those taking part in the campaign. Putting targeted ads out there on social media regarding the new dishes can also help boost interest from potential diners excited to try plant-based offerings from new restaurants or their longstanding favorites.

Alternatively, a restaurant could design a box to add to their existing menu that highlights its plant-based offerings to Veganuary participants. It doesn’t necessarily require new dishes to be added to the menu for the Veganuary month, it can simply be a new way of showcasing existing plant-based dishes in a way that draws more attention to them.

With over 629,000 participants signed up in 2022 and more expected this January, we hope to have shed some light on how to make the transition easier for people taking part on both the consumer and business sides. 629,000 is only the official figure based on sign-ups – realistically the numbers go far beyond that with thousands of people taking part without registering online. It’s become so synonymous with the month of January that there’s no way of tracking the true extent of its popularity. However, one thing is for certain: it’s the perfect time to spread plant-based recipe inspiration and for businesses to up their timely approaches to marketing.

How to create a menu for Veganuary?

How to celebrate Veganuary?

Veganuary is a campaign that anyone can take part in, all you need to do is commit to being vegan for the month of January.

What is the most popular Asian dish?

You can take part in Veganuary in any city or country in the world. In fact, Veganuary 2022 had participants from over 220 countries.